Today marks the 100th birthday of the National Park Services. And damnit, I am especially proud to be an American today. Although the first National Park (Yellowstone) was designated in 1872, it was on August 25, 1916 that President Woodrow Wilson signed an act that created the National Park Services to preserve “unimpaired the natural and cultural resources and values of the National Park System for the enjoyment, education, and inspiration of this and future generations.” I love that our young nation had the foresight to fund the preservation of our most beautiful assets. No matter how far I travel, I return home knowing that I can get in a car and just drive to see some (a few require flights) of the most spectacular sights in the world. Today, we celebrate its centennial and I want to share a few of my favorite photos and memories of my time in some of these grand locations. 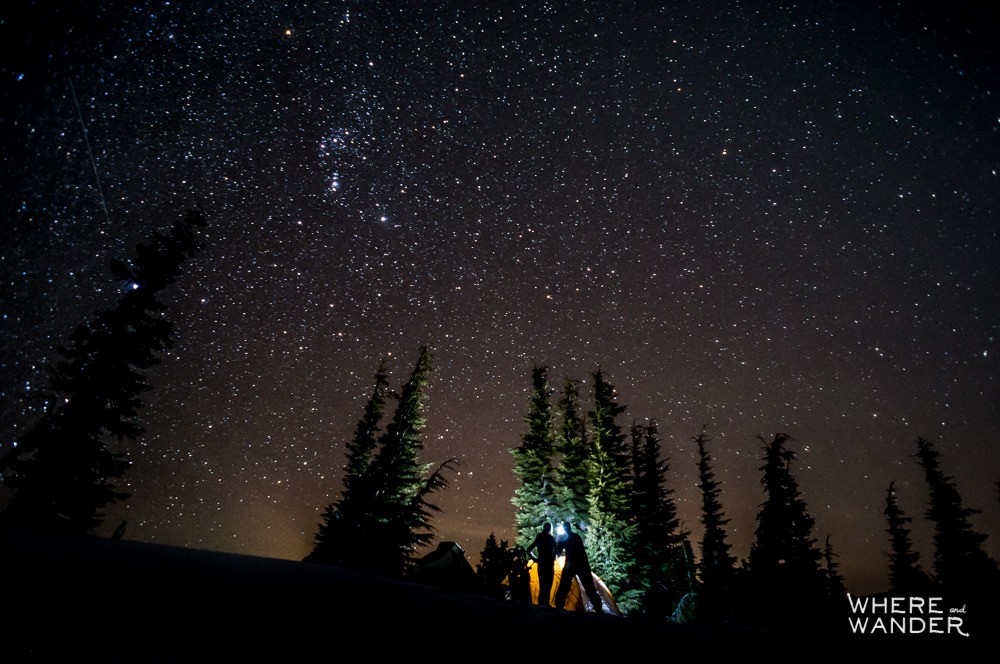 It’s incredibly fitting that the first National Park that I visited also happens to be the first one to be designated a National Park. It also happens to be one of the most surreal places to visit in the United States. Yellowstone National Park sits on a super volcano and if that’s not impressive enough, this 2.2 million acre park has one of the most unpredictable set of microclimates in the world. In the middle of June, I experienced rain, hail, a blizzard, and completely sunny weather all in span of a couple of hours. 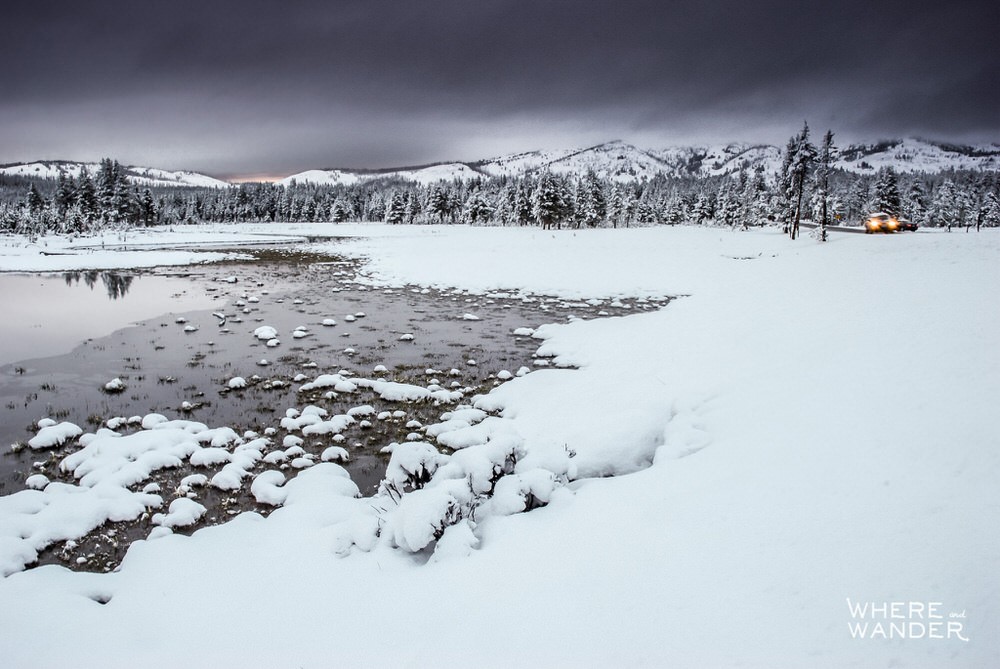 After hiking in shorts just a couple of hours earlier, I found myself knee deep in snow to capture this shot just as the sun was starting to set. After hitch hiking back to the cabin, I warmed up with a hot cup of coffee ready for the day to end, when suddenly the dimming light through the restaurant windows just exploded and it was as bright as noon at 9 pm. It was as though someone had simply decided to take the setting sun and moved it right back into its mid-day position. I have no explanation, but it was magical and my most memorable moment in the park. 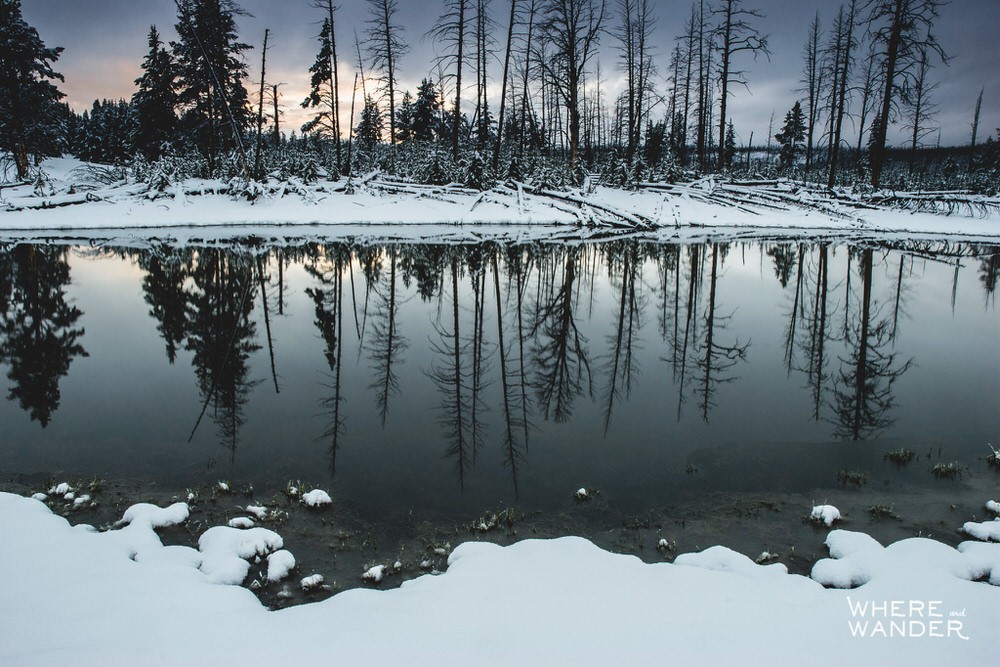 Most people who hike Half Dome plan for it ahead of times. Nowadays, you have to secure a permit months in advance, but we decided to go on a whim and didn’t start the hike until about 11 am. Most people start at dawn for this 15 mile full day trip. By the time, we got to the infamous granite climb, it was already near 5 pm and most people had already begun descending the mountain. In fact, we were the last group of people that attempted the climb. 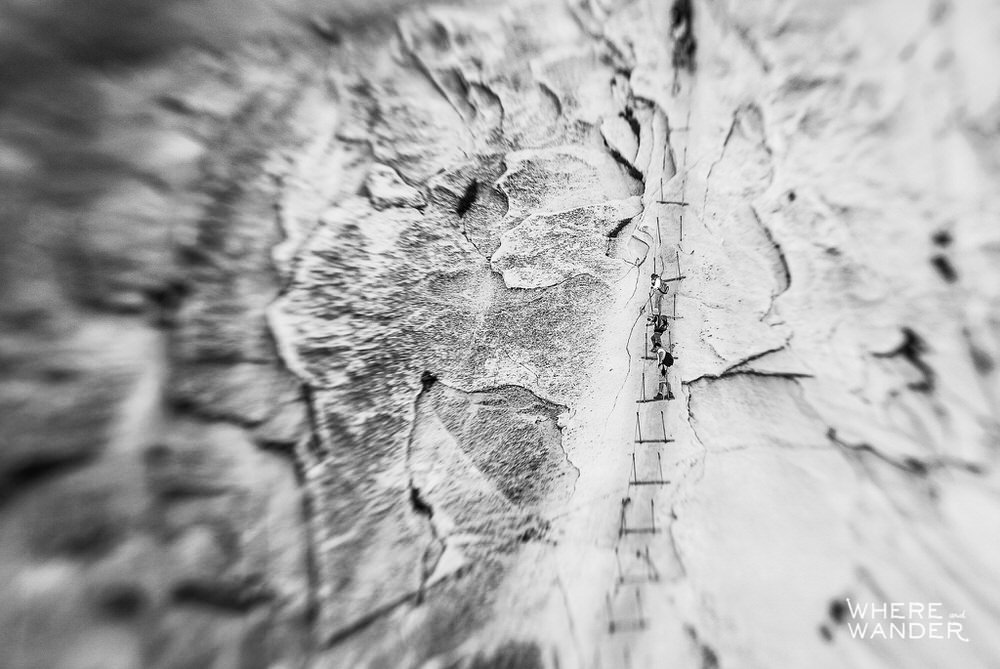 It is a rare sight to see this section so empty and it actually made me feel a little nervous because there was just simply no one around, above or below us when we started going up. By the time we started our descent, we knew that we would be hiking back out in the dark. Incredibly, but not altogether, unsurprising, considering our last minute decision to do this hike, was that I was the only one in our group with a head lamp. So together, we hiked in close proximity completely in the cold and dark for a few hours. Adding to this, we had run a stretch of the trail when it was still light out and nearly barreled into a cub making its way across the trail. I didn’t see the mother around, but this only reinforced that we were hiking in their territory. I knew it wouldn’t do much, but I hiked most of the way in the dark with a sharp rock in my hand just in case.

On my trip to Maui recently, we decided to do the early wake-up and drive to the top of Haleakala to watch the sunrise. We were told that it was a must do. So we did. Expecting it to be cold, we arrived in our hotel robes. Best. Idea. Ever. With my eyes barely open, we parked and hiked up to a point where we didn’t see anyone else. We could hardly see more than a few feet ahead with the dense layer of mist surrounding us. Around dawn, we saw the first light of day peak through and had the faintest bit of hope that we would actually see something through the mist.

And then as if on queue, the clouds part just as the sun came up for the most breathtaking view of the crater beneath. I quickly captured a shots and then just stood there in my robe, letting it all just soak in. And then the mist and fog returned just a few minutes later and the view was gone. 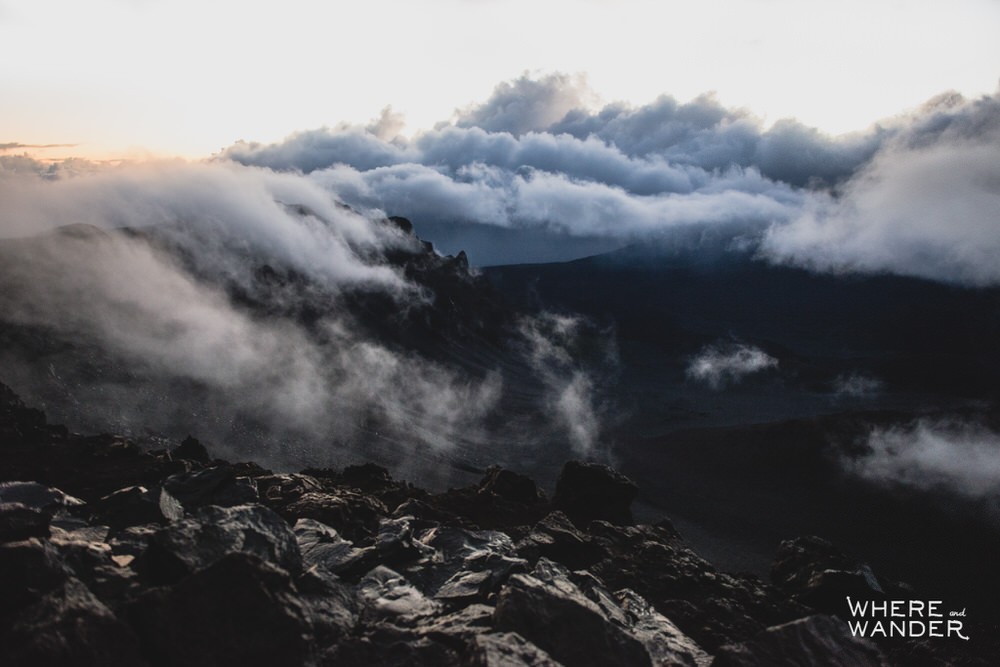 This one was memorable as much for the spectacular milky way view at night as it was for my little accident sliding down the slide of the mountain. We came out in January last year to do some snowshoeing up to the summit of Mt. Lassen. On our way down, we decided to glissade down with our ice axe, which basically meant we would slide down in a seated position and control our descent with our ice axe. Long story short, I slipped at some point, tried to stop my descent with my pick axe, which ended up ricocheting into my head, before trying again and stopping myself before god forbid who knows what else could have happened. 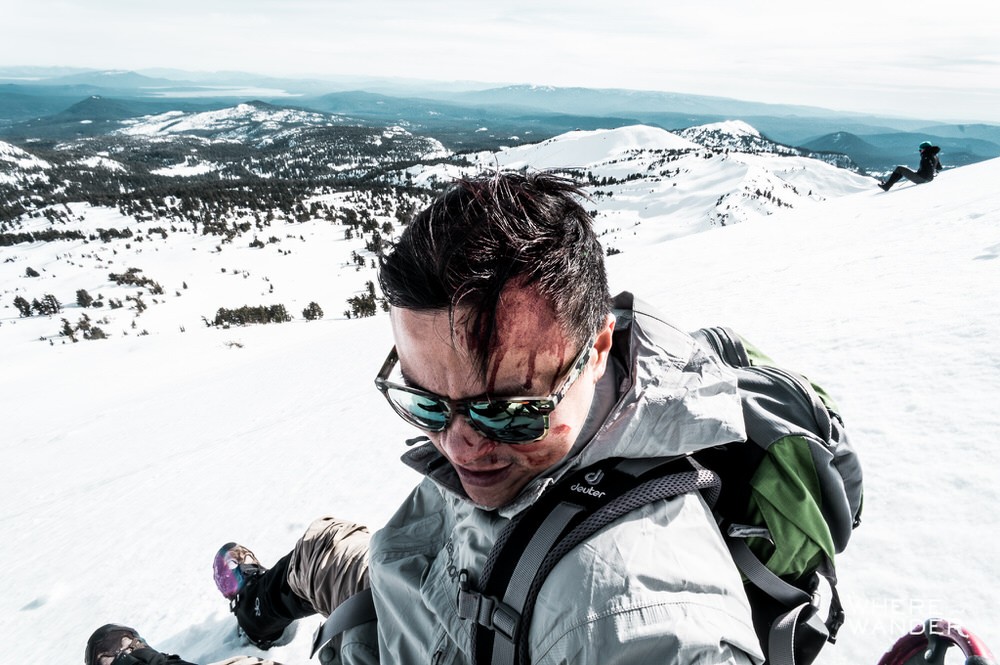 Ironically enough, we had left the first-aid kit in the car, but my friend had his super glue on him. So it was decided that we would hike back to camp, clean up the wound, and superglue it together. It worked. I’m glad we didn’t panic and rushed to the hospital, because I would have missed out on a beautiful night filled with stars. 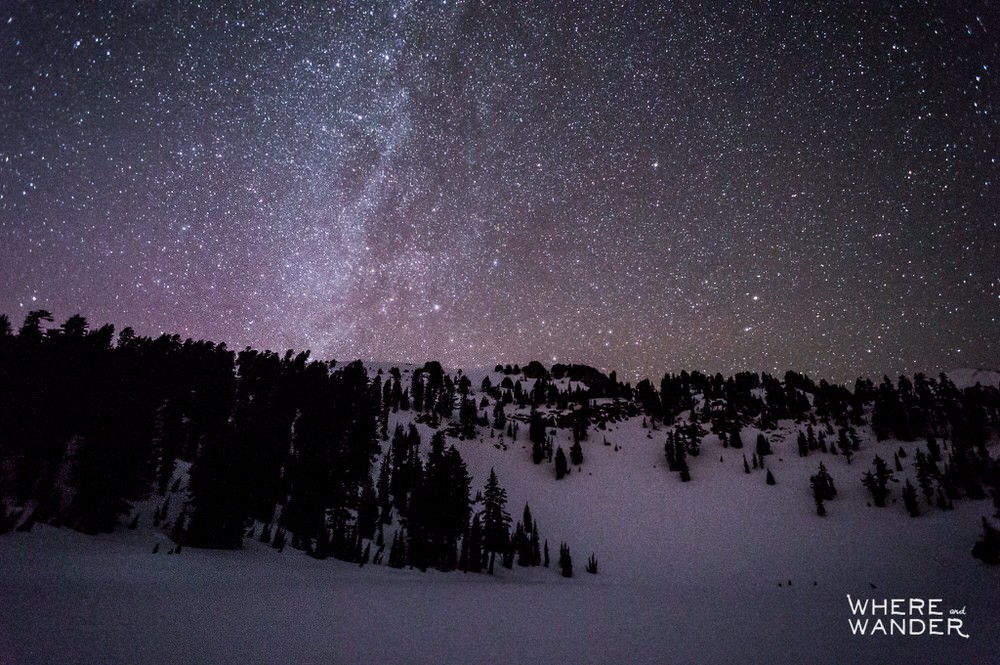 I remember this place because I didn’t even know about it until we were in New Mexico and looking for some places that were near Roswell. Unfortunately, this was also where I broke a brand new Nikon camera and my trusty 24-70mm when I turned my head and my tripod (which hadn’t be steadied as properly as I’d like) toppled over. This was one of the few shots I got before that happened. 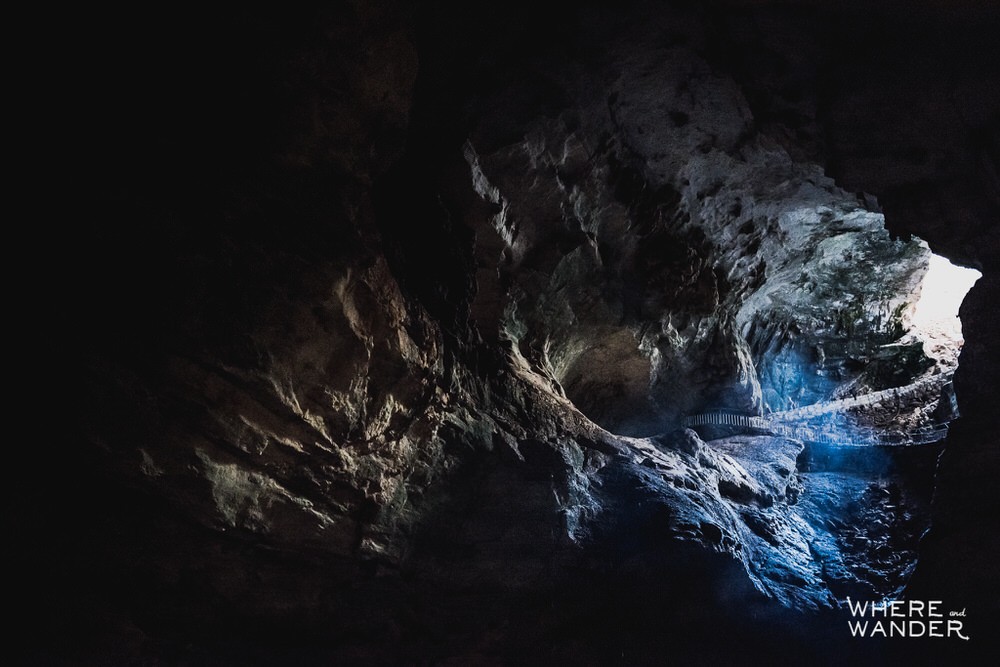 Angel’s Landing is one of my all time favorite short hikes. It has everything. An unreal terrain, some nice elevation, and a bit of danger with some steep drop-offs. At the top, you get this spectacular view. 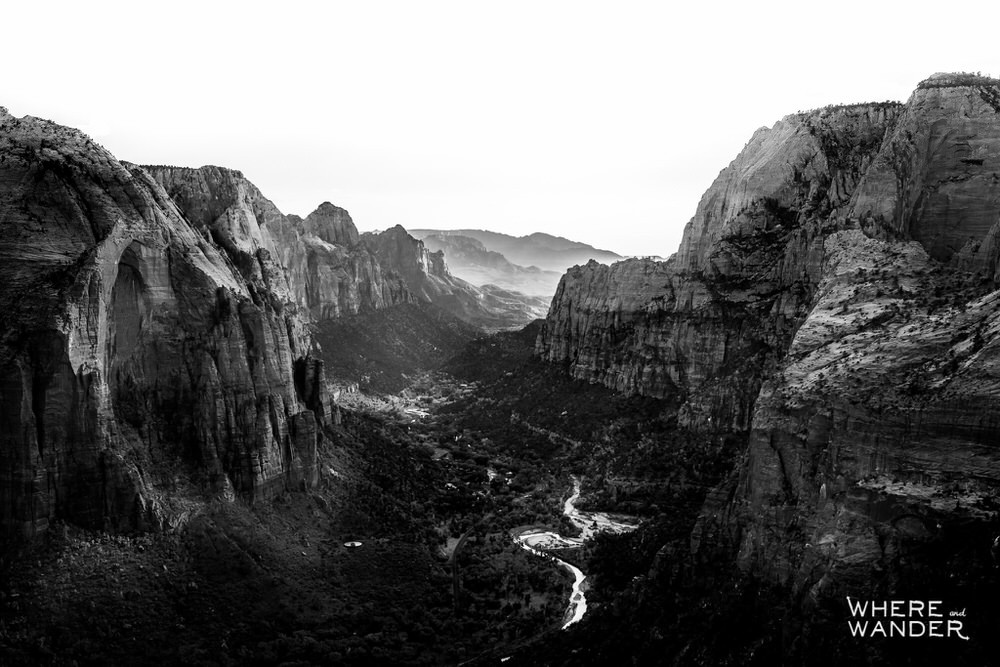 The photo below sums it up. This white desert in the middle of New Mexico should be getting more visitors than it does. Or maybe it does, but when we were there bright and early on a weekday, it was as though we had the entire place to ourselves. From atop the dunes, your eyes get lost in the endless waves of white. Be sure to bring along something to slide down the dunes on. 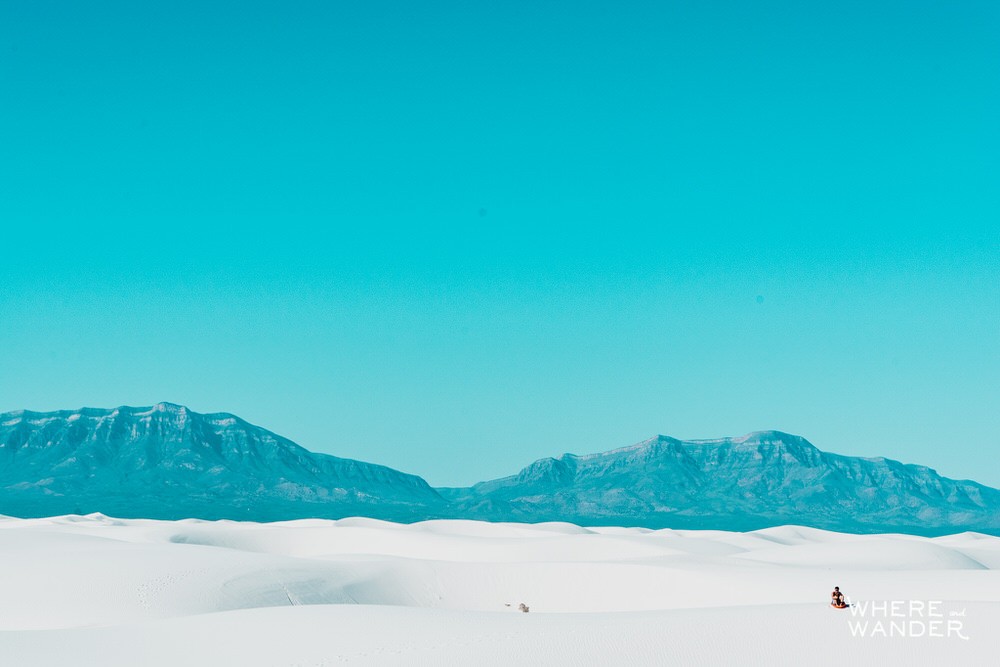 This place is magic and one of the most accessible National Parks. This is where the NPS did a great job by designing a road that takes you right up to most of the best arches within minutes of parking. For the more adventurous, you can do longer hikes to even more arches. 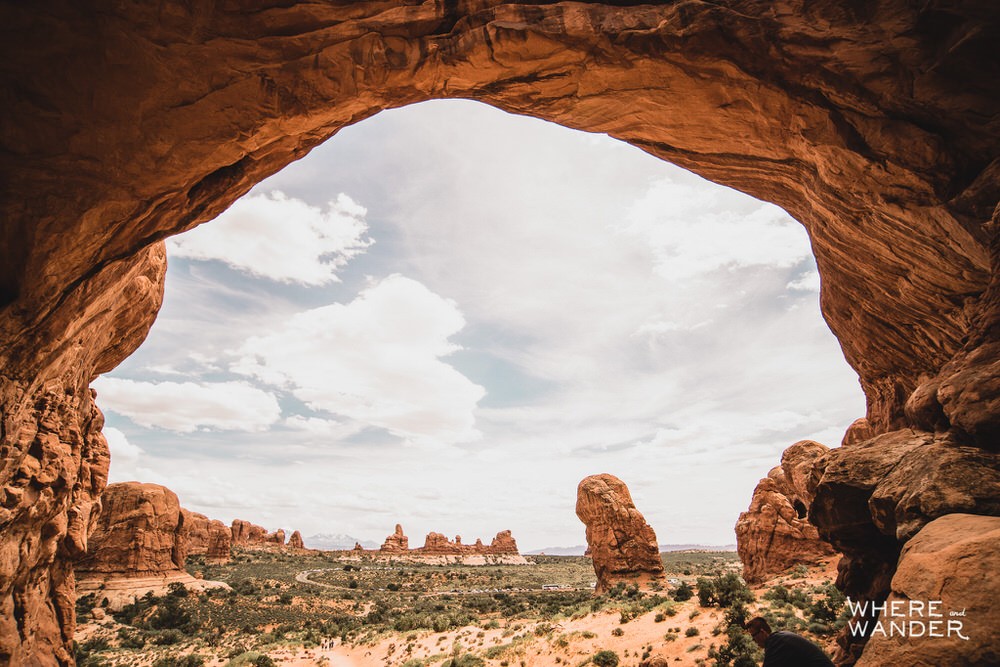 What made my second visit even more memorable was that we explored it at night when the park was mostly empty. On a moonlit night, we didn’t even need our headlamps. It’s no wonder there’s a postcard at the gift shop that says “where half the park is after dark.” 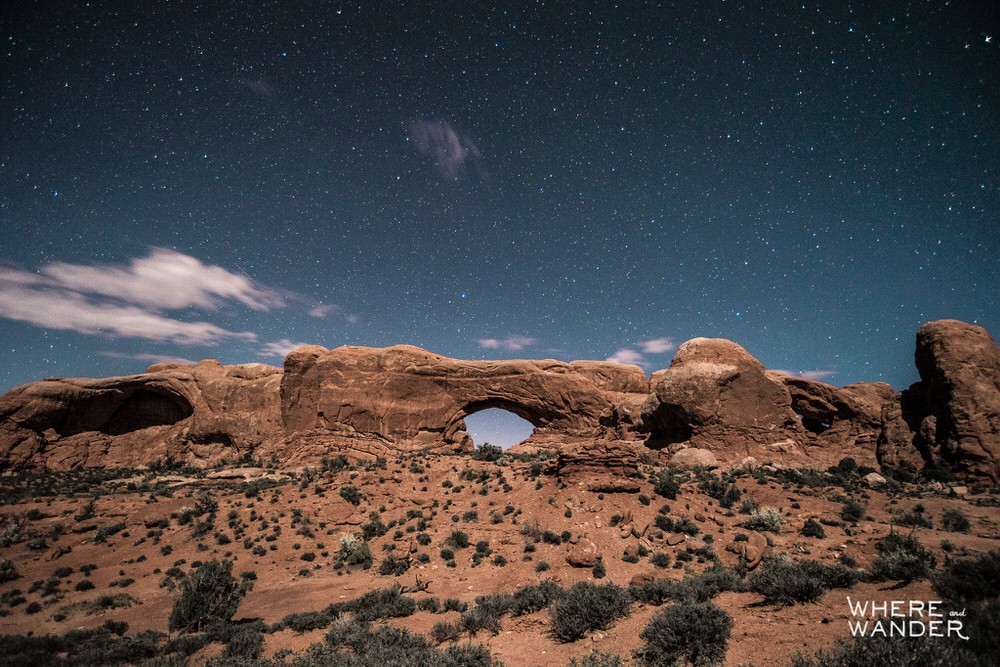 So here’s to another 100 years and longer. Thank you to the National Park Services for preserving and maintaining these beautiful places for generations to come. I’m sure Teddy Roosevelt would be smiling today if he could see how many National Parks and Monuments have been designated since his time.